Lima: home of the VW bug

Lima is a very large city with 10 million people. We are heading up to Iquites tomorrow to start our work soon at the Centro de Salud. I wanted to give a brief description of our experiences in Lima. First off it is huge and like most alrge cities. When we arrived at the airport there were hundreds of people awaiting friedns and family, more than I have ever seen at an airport waiting. Lima is the only international airport in the country (which was not the case several years ago). The city is noisy and full of people all the time. It is summer here now so kids are on break. The streets seem to be crowded with cars, buses and the sidewalks with street vendors and people. Even at stoplights, street perfomers will try to earn a tip during the red light by juggling fire, acting as a mime or by dancing. The city is fairly easy to navigate once you get the system down. There is a newer bus that runs from north to south called the metropolitano that is clean and fairly efficient. They have a specific bus lane dedicated to these buses so they don't have to deal with much traffic, however it still takes more than an hour to go from the north en to the south end of the city. It is quite cheap and costs only S/1.50. Thre currency here is the Sole (pronounced sol-ee, 2 syllables). $1.00=S/2.61, at least that was my exchange rate at the bank in Lima, Fr. Jack said this is one of the lowest he can remember. Driving seems to be fairly reckless, although i have not witnessed an accident I am sure there are many. Drivers use their horns constantly, not because they are upset, but rather to signal several things such as: hey i am here and coming into your lane, don't pull out because you will hit me or if you are a pedestrian i will hit you, do you want to ride in my taxi, pay attention i am turning right from the far left lane throught 4 lanes of traffic, etc. There is quite a bit of smog and the air is not pure to breathe, very noticable compared to Chicago. If one wants to get around not using the metropolitano you can use the other bus system which has specified routes, however most buses are not like the ones we have in the states. They are vans with a driver (who honks often as described above) and his partner who mans the sliding door on the side, hanging halfway out of the van screaming the route and soliciting riders. Once inside you cram into a seat with not much padding and bounce around until you reach your destination. THis bus costs only S/0.50-S/1.00. So it is very cheap to travel in the city to get where you are going. When in traffic vendors tryign to make a living often come to the windows and offer ice cream or snacks to passengers. VW beatles abound!
Brian
No comments:

Thursday January 26th. While we await the paperwork for our entry into the colegio de medicos (College of physicians) we are getting to know the city of Lima as well as the key people we will be working with in helping organize patient care and creating a sustainable system under the organization of Pango. Silvana Lee the accountant, Jorge Bravo the lawyer, Padres Jack and Moe, and Brian and I had a debriefing/strategic planning meeting for 6 hours. We discussed the past, present and future of PANGO- the civil association under which Centro de Salud Santa Clotilde (CSSC) runs. The Vicariate- a juristiction of the Catholic church in our missionary region (Iquitos) and the Peruvian Ministry of Health have historically supported CSSC. On November 9, 2010 PANGO- a non profit civil association was formed. The objectives of PANGO are to sustain and maintain the present level of service at CSSC and its associated health posts, to search for opportunities to improve and expand health servcies, to offer participation and training to national and foreign health professionals, and to develop strategic alliances with persons and institutions with common goals nationally and internationally. PANGO is the future of Santa Clotilde. PANGO is necessary because when Padre Jack retires, his and Padre Moe's amazing work of 27 years must be carried on, over 100 villages are depending on it.
Toni
No comments: 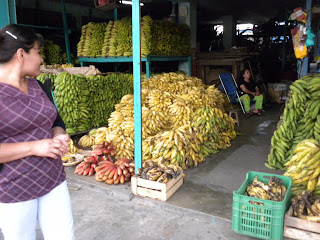 Friday, Jan 27th, Susana invited me to go pick up Platanos (bananas) with her. I had no idea what I was in for... We arrived in Monkey heaven! I was walking down the street, not unlike any other ordinany walk I had taken and suddenly I was transported into a magical place where there were mountains of platanos piled sky high! They were green and red and yellow, large and small, in warehouse after warehouse. Each bunch has been dipped into a vat of some liquid... ethalene to ripen them... maybe? Soon we will venture to the Selva to meet the gatherers of bananas!
Toni
No comments:

Arrival to Lima: the Guesthouse 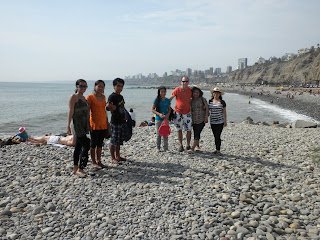 We arrived in Lima Monday Jan 23 in the late evening. Padres Jack and Moe met us at the airport, managed to squeeze all our bags into a hatchback, and brought us to the guesthouse in Santa Catalina where we enjoyed our first Peruvian meal... pizza from Papa Johns and some cerveza. Tuesday Jan 24 was a whirlwind... we went to a talk on Peru, and met many Priests from all over Latin America here for a Justice and Peace Conference. We spend our evenings at the guesthouse with patients from the Selva (Jungle) who are receiveing specialized treatment here in Lima. One young woman was torn away from her nursing baby Gabriel and her 8 year old son Kevin after her doctor discovered that she had Stage 3b cervical cancer. She is undergoing radation and brachytherapy (internal radiation), which is even more as painful than being away from her family. The good news is that her next treatment is not for 2 months, so we will travel together next week to Iquitos to reunite her with her family. Another 19 year old young man accidentally had a barbed fish hook pushed though is eye as a 12 year old. Fr. Jack managed to remove it and transfer him to Iquitos, but he was left with a severly scarred cornea near blindness in his eye. Now that he is fully grown, he is back in Lima in hopes to receive a corneal transplant to restore his vision. We have learned that he is a talented guitar player- who gently played for Rudy as a calming distraction after she returned, in pain, from her brachytherapy treatment. Javier, a 44 year old man, was diagnosed with colon cancer. They found a large tumor and multiple polyps. Almost his entire colon was removed and he is here awaiting a third surgery, but thankfully cancer-free as of now. He worries about his daughter (and other children) who spent an evening with us at the guesthouse- hoping they don't have to go through the same thing since his cancer may be hereditary. This guesthouse is an incredible blessing for those who stay here- they have each other as support through difficult times. The patients that come from the Selva are supported and looked after by Manuel who is originally form the Rio Napo region. His wife is from Lima and she worked at Centro de Salud Santa Clotilde (CSSC) during her one year clinical training to become a nurse, that is how they met. They now live a few blocks from the guest house next to her parents here in Lima. Manuel helps the patients, most whom never have been to the big city, by arranging their appointments, accompanying them to clinic and helping fill out all of their paperwork that is needed. If he weren't here, we would have no way of getting patients the higher level of care they need, as you can imagine the paperwork and beurocracy is quite tedious in Peru. Manuel is very good at what he does, in fact he worked for several years doing similar organizational work for medicinas sin frontieres (doctors without borders) in Ecuador, Columbia and Peru.
No comments:

Give to Santa Clotilde Mission