Hello everyone!!!!  We have not blogged in a long while, and although we have been away from Peru for almost 3 months now it has been for good reason. Antoinette and I are in a 4 month formation program in Los Angeles, CA with Mission Doctors Association (missiondoctors.org). As we have mentioned previously this group, since 1959, has been supporting doctors on mission throughout the world including Zimbabwe, Uganda, Papa New Guinea, Thailand, and Kenya. We currently have doctors in Guatemala, Cameroon and Peru (when we head back to Santa Clotilde). Our formation program is very interesting and we are in class from Monday through Friday learning helpful skills to aid our work outside the U.S and away from the culture and way of life we are so accustomed to here at home. Our curriculum consists of several topics such as mission theology, communication, Myers-Briggs, cultural awareness, emotional health, moral theology, surviving overseas, health overseas, and enneagram to name a few. Although we were already in Peru for one year, we recognize the importance of these classes and how it will help us to communicate, avoid burn-out and not make common mistakes when working abroad. I think we are more aware of ourselves and will be able to live and work a more balanced life when back at Centro de Salud Santa Clotilde.
Speaking of Santa Clotilde, the work carries on!  I would like to thank Fr Jack, Dr Juan and Dr Julio along with all the midwives, dentist and staff for continuing the good work while we are gone, as well as the volunteers and students from Mission Doctors, Loyola, UBC and U of Minnesota.  Some exciting news comes back to us from Peru such as: a visit from the national Ministra of Health who sat  down and had a conversation about our reality. Progress is being made on our x-ray machine slowly but surely, and another doctor from El Salvador, Cuban trained is also working on the river. Our logistics coordinator Javier and Padre Moe are working diligently to restore in working fashion the barcasa, our barge that will be able to make trips up and down the river, even all the way to Iquitos for vaccines, supplies, patient transport, and our Amazon experience for visitors.
We are in training until the end of May and then back to Chicago for a while, then back down to the selva which I think about daily. Keep us and all on the Napo river in your prayers! 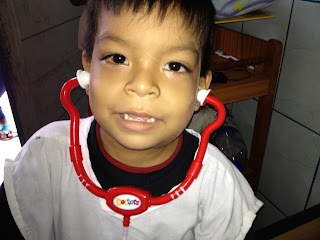 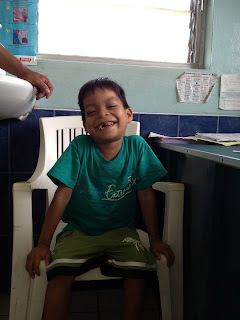 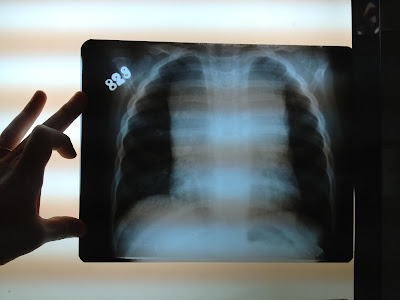 Italo was a 5 yr old with difficulty breathing and swollen lymph nodes in neck. I've never seen such an impressive X-ray. He had Leukemia or Lymphoma. Pray for Italo and his family.
No comments:

The fragility of life 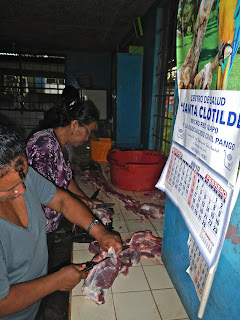 Just after Christmas on Dec 28th is Toni's birthday. To celebrate I wanted to throw a party and following tradition provide a nice meal for our guests. Since Antoinette is allergic to poultry; the food staple of chicken was out. I decided to buy a pig to serve. However, here in the jungle buying a pig is not as simple as going to the grocery store and buying a ham, or pork chops or ribs. One of our co-worker's mother raises pigs about 45 minutes up river. The morning of the 28th he left and picked up a pig, i thought a 30-40kg pig would suffice, he came back with a 62kg pig, and although it cost more than I was expecting to spend it was very cheap in comparison to the same amount of meat back home. He came back in the early afternoon with the hog tied and hanging froms it legs on a post.  We carried it outside of the kitchen and then proceeded to prep the pig. It was the first animal i have ever killed (other than a bird with our BB gun a long time ago...even then i think it was my brother that pulled the trigger- we both felt very guilty afterward for killing a living animal). They first boiled a huge pot of water then showed me where to stab the heart, after a few loud wails from the pig he took his last breath. (warning some more graphic pictures below) I felt as if i was re-enacting images that were evoked while reading "The Lord of the Flies" in high school. Then the other guys teaching me the ways of butchering and preparing a pig did the rest. They poured the boiled water on the pig and scraped off all the hair leaving only the skin, then they opened up the underside from neck to rear and took out the viscera. Then we sectioned the pig and cut away the fat. That night we prepared a rub and let it sit overnight in various fridges as it was a large amount of meat; the next day the whole pig was cooked for the party on Sat night.
It was a much different feeling eating this food, as i think about the whole process, i did not feel guilty as I did with the small bird killed during childhood. People here learn to hunt, butcher and prepare food out of necesity, and it is a ton of work. I reflect on the way of life for the Native Americans in our country who hunted buffalo in a group and working as a community to butcher the meat and drag it back to their camps. How the government and white people took their way of life away from them by killing all the animals for sport or fun. Here it is a pure form of living, one much more atuned to nature and the abundance the earth can provide.
The pig tasted as delicious or better then the meat back home. At the party, we ate the pig, drank some beer and danced; it was a fun night and I think Antoinette liked the present of a pig. It is a present neither one of us is soon to forget.......yes I also bought her a nice new umbrella, not just a pig.  Below are some pictures, some a little graphic 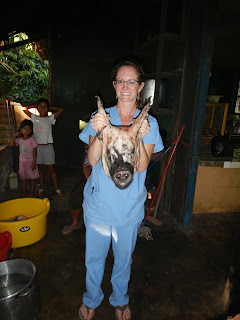 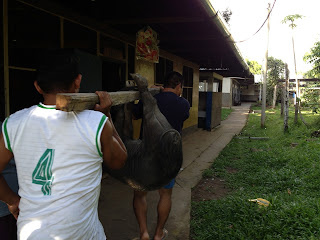 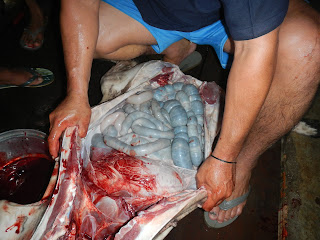 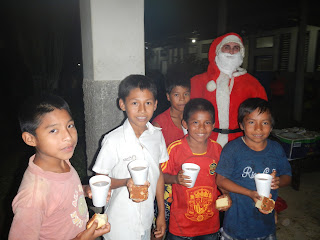 Give to Santa Clotilde Mission